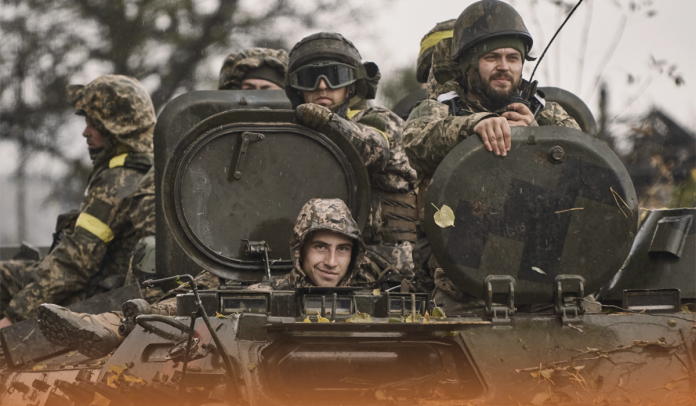 On Thursday, Ukrainian and Russian military forces seemed to be preparing for a significant military action over the strategically important port city of Kherson, in an area which Vladimir Putin, the Russain President, has illegally seized and subjected to martial law, indicative of an intensifying effort to achieve his war goals.

Heavy battles and evacuations were noted in the southern Kherson region as Russia attempted to heavily hit the war-torn state into submission with more devastating rocket drone strikes on civilian infrastructure. On 20th October, on the side of an earth road, near Shevchenkove, an urban-type settlement in Ukraine in Kharkiv province, a 22-year-old Kyiv military personnel lines up a self-propelled BM-21 Grad rocket launcher.

The Russian President announced ‘martial law’ in four Ukrainian areas partially occupied by Russian invaders – Donetsk, Kherson, Luhansk, and Zaporizhzhya – on October 19 in an attempt to assert Moscow authority in the forcibly seized regions as he faced multiple battlefield losses, a troubled military mobilization, growing criticism all over the world, and global sanctions.

The administrative center of Kherson province, with a population of 289,697 (2017 – UN estimate), was one of the first built-up areas Moscow forces seized when it attacked the East European state, and it remains the biggest city it holds. Moreover, it’s a key target for Russia and Ukraine as it’s the home of a major ship-building industry.

Moscow-appointed officials have asked Kherson residents to leave for their security and let the forces build military buildings to defend territories in the Russo-Ukrainian war. As of Thursday, according to officials, around fifteen thousand people of an anticipated sixty thousand had been moved from the city and nearby regions.

Furthermore, according to Vladimir Leontyev, a Moscow-appointed official in Kherson, Kyiv troops had carried out five rocket attacks against the Kakhovka hydroelectric power plant and reservoir nearly 44 miles from the region’s capital.