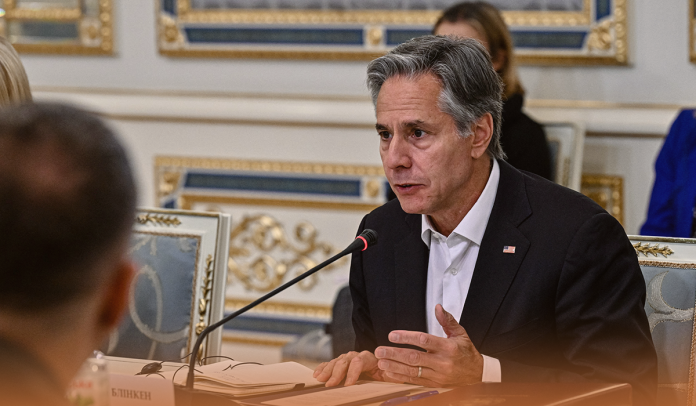 Antony John Blinken, the U.S. State Secretary, made a secret visit to Kyiv, the capital of Ukraine, announcing around 2.7 Bn dollars to assist Ukrainian and Western allies in their defense efforts. In addition, Antony Blinken and the US Defense official Lloyd Austin said that with Kyiv forces conducting a counter-strike against Russian invaders to recapture the lost land, Washington would provide further 675M dollars in security financing for Ukraine.

In addition, the US diplomat said that he was requesting the United States Congress more than two billion dollars in defense assistance for long-term financing in boosting the defense of Ukraine and eighteen other neighboring small and susceptible nations so that the countries could maintain control over their territory and land.

According to Antony J. Blinken, the total assistance from the current American government since Moscow launched its unjustifiable incursion on Feb. 24 becomes 15.2 Bn dollars to develop Ukraine’s security capacities.

Furthermore, the unannounced visit made by Mr. Blinken to the Ukrainian capital via an 11-hour overnight train ride from eastern Poland was his second trip since the Russo-Ukrainian war started in February. Blinken’s surprise trip was meant to express determined American backing for the Ukrainian people and forces.

The US Secretary of State told Volodymyr Zelenskyy, the President of Ukraine, that the US knew this is a crucial moment, around 199 days into Moscow’s violence and barbarity against its neighboring country, as their counter-strike was now ongoing and proving successful.

The surprise visit by Blinken came as the US Defense Secretary joined the meeting with allied officials at the Ukraine Defense Contact Group gathering, which endeavors to harmonize the flow of defense assistance to Kyiv. The large-scale influx of European weapons and equipment, especially long-ranged HIMARS weapons, have empowered the Armed Forces of Ukraine to attack Russian defense infrastructure and supported counter-attacks in the country’s northeast and south.

Moreover, as allied Defense Ministers at United States Air Base in Germany to negotiate how to assist Ukraine over the long haul, on Thursday, Joe Biden, the American President, approved a separate $675M to Ukrainian military forces, according to Mr. Austin. And the new security package will contain additional anti-tank systems, M142 HIMARS, and the High Mobility Multipurpose Wheeled Vehicles.