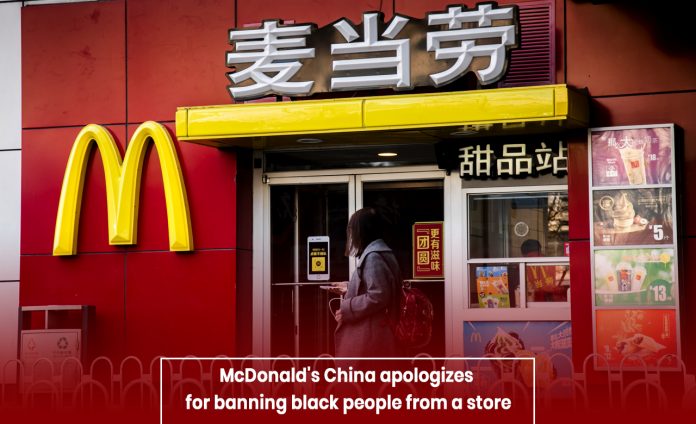 In China, McDonald’s is in trouble after displaying a sign that showed the banning of black customers from the territory.

The signboard posted on social media sites that denotes McDonald’s restaurant in Guangzhou banned the black people by saying that from now on, the black community isn’t permitted to enter in the restaurant.

Again, for those who still doubt that Black people and particularly #AfricansinChina are being targeted we feel it is our duty to share this. A sign at a @McDonalds restaurant seems to make this perfectly clear pic.twitter.com/FaveKrdQHi

In a statement, McDonald’s told that the sign is not expressing our inclusive values. That location was closed for a while and the sign was removed.

Racial crisis are deeply stood and breaking the equality between locals and Africans, in the industrial city. A warning from Chinese administration about the increasing number of COVID-19 imported cases have stoked anti foreigner sentiment.

Furthermore, in the southern city of china, the African community ejected from their homes, even closed restaurant doors for them, and most of the people are reporting that they didn’t have any contact with any coronavirus patient and had no travel history.

McDonald’s told that it will be shutting down to educate employees and managers on our inclusive values, that suggests serving everyone from any community in which we operate.

It wasn’t the first time when McDonald’s spread controversy. McDonald’s pulled an ad in last November to promote its Halloween desert by using the words Sundae Bloody Sundae. Bloody Sunday was the day in 1972, when British soldiers shot protestors and killed 14 unarmed protestors in Derry, Northern  Ireland.