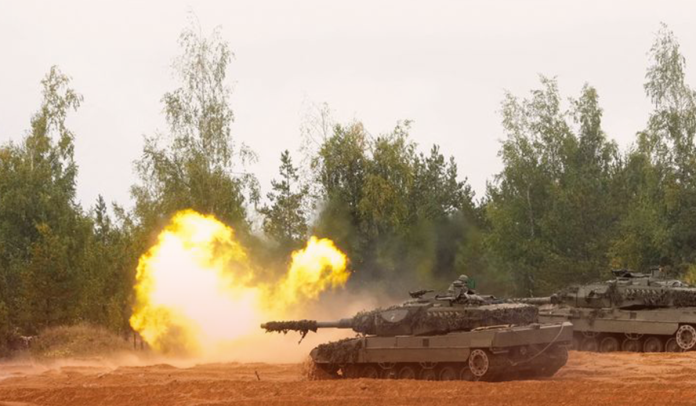 Washington and Berlin are poised to strengthen the defense of Ukraine with the shipment of armored fighting vehicles, according to media reports. The anticipated battle tank deliveries come as the Ukrainian President fired several senior officials on 24 December in the country’s most prominent political shake-up of the Moscow-Kyiv war, saying he needed to clean up internal issues that were hurting the state.

Olaf Scholz, the Chancellor of Germany, has decided to send third-generation Leopard 2 Main Battle Tanks after weeks of increasing pressure on Germany to provide Ukraine’s front lines with universal tanks for playing the role of armor-protected direct fire and maneuver it says it required to repel Moscow invaders.

Furthermore, the United States was also prepared to start a process that would ultimately deliver dozens of a third-generation M1 Abrams – a US main battle tank (MBT) designed by Chrysler Defense (now GDLS) to Zelenskyy forces.

Germany says it’ll give #Ukraine *14* Leopard 2 A6. And it’s allowing other countries to send the tanks as well.

US Poised to Send M1 Abram Battle Tanks to Ukraine

According to an American government official, there would be made an announcement at the White House on January 25 regarding the delivery of the M1 Abram MBTs. A person knowing the deliberations told the reporters that the American commitment could total around thirty Abrams to Kyiv over the coming months.

On Tuesday, German media reported that Germany has also granted other Western states, such as Finland and Poland, the license to re-export their inventories of German-made heavy weapons to Kyiv. The European countries that purchase ordnance from Berlin are usually required to get approval from Germany before re-exporting weapons to another state. Once Berlin approves, around twelve countries will provide around a hundred Leopard 2 Tanks, including 18 by only the Netherlands.

Recently on January 20, Germany’s Minister of Defense said at the Ramstein Summit that Berlin has announced USD 1.1 billion Spring security package for the Ukrainian defenders, so that they can effectively fight off Russian barbarity. According to Dutch Defense Minister, the Netherlands will provide two Patriot missile defense systems to Zelenskyy Armed Forces.