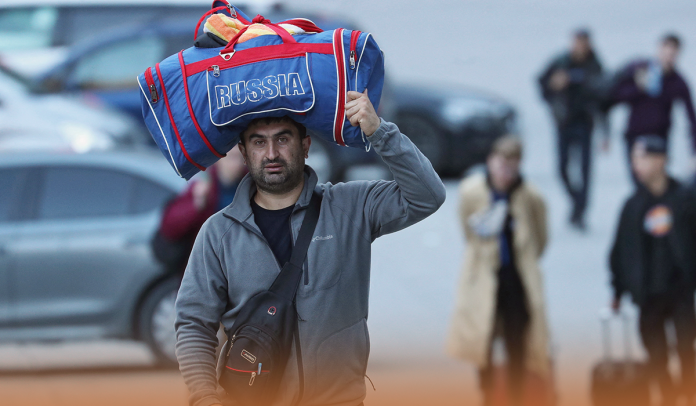 On Tuesday, Russian and Ukrainian armed forces were locked in fierce fighting at several locations in war-torn Ukraine as Moscow-planned, and preordained referendums, which the West criticized as ‘sham,’ in four Ukrainian areas Kremlin hopes to incorporate, near an end.

According to the Ukrainian leader, the country’s eastern Donetsk area remained Ukrainian,’ with battling engulfing multiple cities and towns and cities as Moscow forces attempt to move toward the Western and Southern regions of the country.

Russian troops also threaten people who voted against joining Russia in the sham referendum with mobilization.

“They point weapons at people, give them these ‘ballots’ and tell exactly which box to check,” the Defense Ministry reported.

Additionally, there were confrontations in the northeastern Kharkiv area, which remained the focus of the Ukrainian military’s stunning and swift counter-attack in September. Moreover, Zelenskyy troops continued moving forward with determination to destroy four bridges and river crossings to cut off Russian military supply lines in the country’s South.

Last week, Russia’s Defense Minister said that around 5937 military personnel of the Russian Armed Forces had lost their lives since the beginning of Putin’s invasion.

Furthermore, Russia expects to annex the four Ukrainian areas in the country’s south and east – Zaporizhzhya, the two independent republics, Donetsk & Luhansk, and Kherson – which form around fifteen percent of the East European state. According to the UK’s Defense Ministry, there’s a greater possibility that the Russian leader will formally announce the acquisition of the four regions into Russia on September 30, 2022.

According to official reports, none of the Ukrainian Oblasts are entirely under Russian control, and the battle has been ongoing along the whole battlefront, with Kyiv troops claiming more advancement and gains since they caused Moscow soldiers to retreat in the northeastern Kharkiv earlier in September.

Recently, the President of Russia has issued a veiled threat to use weapons of mass destruction, saying it’s their right to defend their land, which would also include those four Ukrainian areas if annexed by Moscow.

And the Ukrainian Air Force said Tuesday that it has downed three ‘swarming’ HESA Shahed-136 UAVs that attacked the Mykolaiv province in Ukraine’s South.