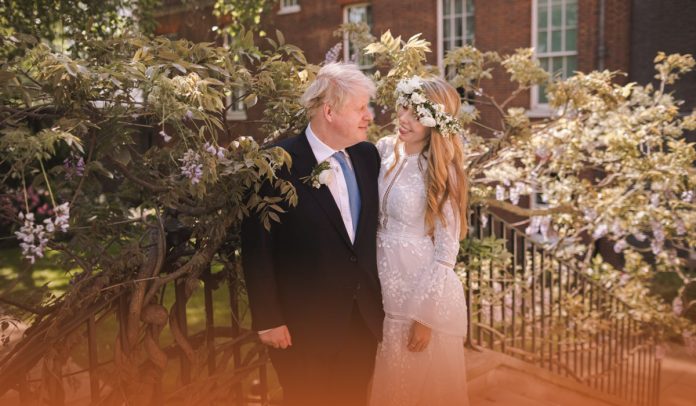 Boris Johnson, British Prime Minister, married his fiancée, Carrie Symonds, in a secretly carried out wedding ceremony at Westminster Cathedral. He is the first British leader to get married in office in nearly 199 years.

According to The Mail, only thirty guests were invited to the wedding ceremony at short notice, including few church officials involved in the preparations at 2 PM on Sunday amid coronavirus-related restrictions.

The marriage services were officiated by Father Daniel Humphreys, who baptized the couple’s first child Wilfred in 2020.

Many congratulations to @BorisJohnson and @carriesymonds & big love to Wilf.

So many weddings have been delayed and disrupted by covid. Life is always better with love 💕

Recently, the Sun reported that the pair sent save-the-date cards telling family members and friends they would celebrate their wedding on 30th July 2022.

Downing Street didn’t disclose any details of attendees and if any of Boris Johnson’s Cabinet members were among the guests.

The new Mrs. Boris Johnson has confirmed she would take her husband’s surname and wore a white dress to exchange promises with the British PM.

On 29th April 2020, Carrie gave birth to their son Wilfred. However, Mr. Johnson was hospitalized with COVID-19 in the same month.

A prominent Environmental Activist, Carrie Johnson, was brought up in southwest London. She studied theater and Art History at Warwick University before joining politics. Then Carrie became Communications Head for the Conservatives. Moreover, she served as a special advisor to top Conservative lawmakers and was on the campaign side to support re-elect Boris Johnson at the time when he was mayor of London.