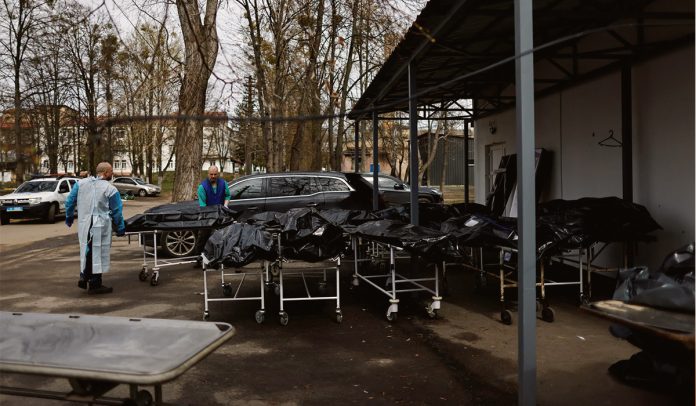 On Friday, the UN Human Rights Office said it had observed mounting evidence of Moscow’s ‘war crimes’ in embattled Ukraine, describing the brutal war as a horror story of international humanitarian law violations against civilians.

Deployed in 2014, the UN Human Rights Monitoring Mission in Ukraine – HRMMU – collected and documented proof of several hundreds of alleged unbearable killings of people in Bucha, a city in Kyiv Oblast, Kharkiv, Sumy, and Chernihiv. All of those regions were under the control of the Russian military in late February and early last month.

Michelle Bachelet, the U.N. High Commissioner for Human Rights, said the Putin-led military has extensively bombarded populated areas in the country, taking the lives of thousands of civilians and destroying schools, hospitals, and civil infrastructure systems, actions that might add up to Russian war crimes.

The UN Rights Chief Bachelet said that what UN Human Rights witnessed in Kyiv-controlled Kramatorsk, northern portion of Donetsk Oblast, in Ukraine’s East, on 8th April when cluster munitions struck the crowded railway station, taking lives of sixty people and wounding more than a hundred, is illustrative of the failure to stand by the principle of distinction, the prohibition of the ‘principle of precaution’ – in the conduct of armed operations; constant care shall be taken to spare civilians & civilian infrastructure – set forth in laws of armed conflict.

Furthermore, the HRMMU has documented and verified 5381 civilian casualties – unfortunately, 2435 killed & 2946 wounded – since the beginning of Russia’s all-out invasion to April 21. About 92.3 percent – 2592 wounded & 2266 killed – were equated in the Ukrainian Govt.-controlled region.

According to the HRMMU press release, about 7.7 percent of 5264 civilian casualties till April 20 midnight – 326 wounded and unfortunately, 79 killed – were verified in Russia-backed forces-controlled Luhansk and Donetsk People’s Republics. Bachelet added that they understand the real numbers will go much higher.

Antonio Guterres, Secretary-General of the U.N., will head to Kyiv and Moscow to negotiate a stop to the 2-month-long unprovoked war in Ukraine. According to the media reports, over 5M people have left the country since Moscow invaded on 24th February. In addition, there’re growing apprehensions for around one hundred thousand people still living in the port city of Mariupol.

On Friday, Guterres’ associate spokesperson Eri Kaneko told the press conference in New York that after holding a meeting with the Russian President in Moscow on April 26, the U.N. Chief will head to Kyiv on April 28 to meet with Ukrainian leader Volodymyr Zelenskyy and Dmytro Kuleba, Ukraine’s Foreign Affairs Minister.

Read Also: Ukraine’s Zelensky: World Should be Ready for possibility Moscow Could Use Nuclear Warheads