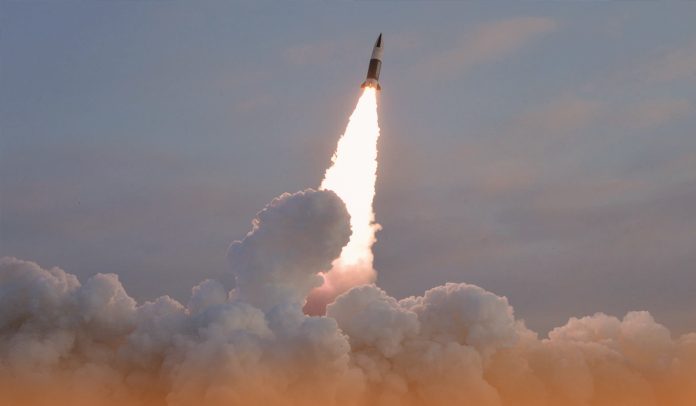 On Monday, Pyongyang confirmed it had test-fired a mid-range Hwasong-12 ballistic missile, the first time since 2017 it has launched a weapon of that size. South Korea and Japan both detected the launch of the suspected intermediate-range ballistic missile (3000–5500 km range) on early Sunday, the 7th weapon test-fire in January 2022.

The latest launch was the same weapon North Korea had once threatened to hit Guam, a US island territory, striking fears the nuclear-weapon state could resume long-distance testing of its weapons. The two nations condemned the launch as a threat to regional security, with officials of South Korea warning that the test-fire could lead to the restarted testing of long-range missiles and atomic bombs.

According to South Korea’s Joint Chiefs of Staff (JCS), a projectile suspected to be a single ballistic missile was launched at about 22:52 GMT from the country’s Jagang Province towards the ocean. Moreover, Hirokazu Matsuno, Japanese Chief Cabinet Secretary, told a briefing that the projectile is estimated to have reached an apogee of 1243 miles (2000 kms) and flown for half an hour to a distance of 497 miles (800 kms).

“That’s a bigger missile [longer-range] than anything since November 2017,” Ankit Panda from the Carnegie Endowment for International Peace wrote on Twitter. “Likely IRBM.”

America is concerned Pyongyang’s intensifying missile tests could be precursors to resumed launching of atomic weapons and ICBMs (intercontinental ballistic missiles) and pledged an unspecified retort designed to show their commitment to their allies and partners, according to a senior U.S. official. That’s not like what North did yesterday; it is the fact that this’s coming soon after a significant number of launches this month. The official urged North Korea to have a hand in ‘direct talks’ with no prerequisites.

Pyongyang has said it’s open to diplomacy, but that U.S. approaches are undermined by its support for sanctions and joint military operations, and weapons buildup in South Korea. Due to a flurry of diplomacy in 2018, including meetings with the former President Donald Trump, Kim Jong Un, North Korean Supreme Leader, stated his nuclear force complete, and he said he’d suspend atomic weapons testing and test-firing of the nation’s longest-range missiles. South Korea also reported the same distance and altitude.

The latest launch comes just days before the beginning of the Beijing Winter Olympics as North gears up to mark what would have been the former North Korean Supreme Leader Kim Jong-il’s 80th birthday in mid-February.