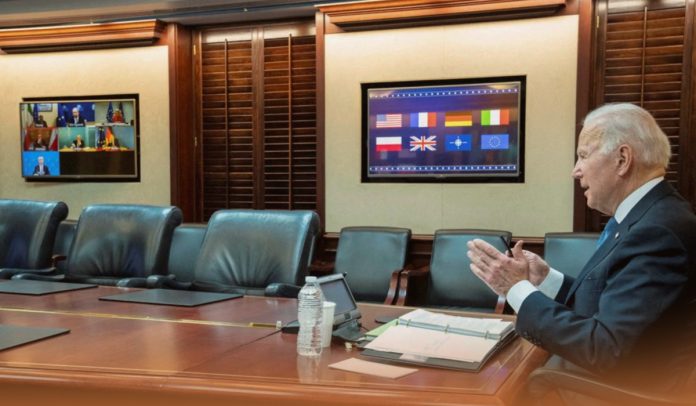 On Monday, Joe Biden, the U.S. President, met virtually with allied leaders of the EU, NATO, and European leaders regarding the ongoing threats of a Russian hostility as he weighs sending thousands of U.S. forces to Eastern Europe and the Baltics. After hosting a secure video call, the U.S. leader told the media that he’d an excellent meeting and achieved “total unity” with all the EU leaders.

The U.S. Defense Department has informed military units in the United States that they should be ready to deploy to Europe if the NATO (North Atlantic Treaty Organization) alliance requests them, as tensions with Moscow over its military accumulation along the border with Ukraine continue to rise.

Boris Johnson, the PM of the U.K.’s office declared a statement that supported Joe Biden’s summation, saying that the leaders reached an agreement on the importance of international harmony in the face of rising Russian aggression. Lloyd J. Austin, the U.S. Defense Secretary, placed 8500 U.S. troops on ‘high alert’ of being dispatched to Eastern Europe, where most of them could be activated as part of a North Atlantic Alliance response force if Moscow invades the foreign Soviet Republic.

.@PentagonPresSec: @SecDef has placed a range of units in the United States on heightened preparedness to deploy, which increases our readiness to provide forces if @NATO should activate the NATO Response Force. #WeAreNATO pic.twitter.com/DxCpFo2vqg

The Pentagon spokesperson told the media that it is evident the Russians have no intention at present of de-escalating, adding what this’s about, however, is reassurances to their NATO partners.

“decision has been made higher alert only” – Kirby

Furthermore, the Pentagon hasn’t yet identified which units have been placed on heightened alert, but the capabilities include more brigade combat teams, aviation, logistics, transportation, and reconnaissance. In addition, American troops in Europe could be placed on high alert to move with Europe if asked. But, Dmitry Peskov, Kremlin spokesperson, accused America and its NATO partners of growing tensions.

After the meeting, the White House declared a statement that said that the leaders also discussed their combined efforts to prevent further Russian aggression against its neighbor, including preparations to impose immense consequences and severe economic costs on Russia for such moves and strengthen security on Eastern Flank countries. Moreover, the U.S. President has ruled out sending forces to Ukraine if Russia invades the country but pledged to impose prompt and severe economic sanctions on Russia.

John Kirby, the spokesperson for Pentagon, said that the decision was made by President Biden to put these forces on high alert and was in part the result of advice given by Lloyd Austin and Gen. Mark Milley, Chairman of the Joint Chiefs of Staff. Moreover, Kirby said that the decision had been made to put these units on heightened alert and higher alert only. Nothing has been decided to deploy any forces from America at this time.