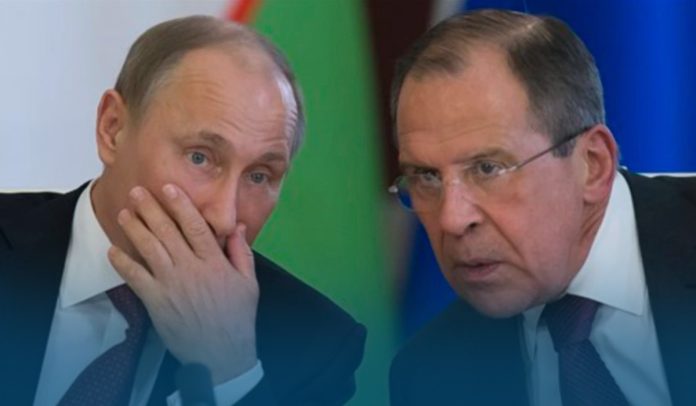 On Friday, the United Kingdom, the United States, and the European Union announced sanctions on Vladimir Putin, the President of Russia, and Sergey Lavrov, Russia’s Foreign Minister, the only time the two men have been targeted by such actions. The United States Department of Treasury announced the move after the European Union foreign ministers meeting in Belgium consistently reached an agreement to freeze the assets and bank accounts of targeted Russian officials.

The US announced that it would freeze the assets of Russia’s Putin and Sergev Lavrov, Russian Foreign Minister, following similar measures taken by the U.K. and the EU, as countries worldwide chased to impose harshest sanctions against the government of Russia over its large-scale attack on Ukraine.

The decisions were made in consultations with each other, marked a new round of sanctions effort, and Russian leader and Foreign Minister in company with Bashar Hafez al-Assad, the President of Syria, and the former Zimbabwean leader Robert Gabriel Mugabe.

Furthermore, the European Union stated it planned to halt EU-based possessions of the two top Russians. America and the United Kingdom didn’t instantly release specifics of their moves. Neither official is supposed to control wide-ranging or any assets in his own name inside the 27-nation Union. In addition, the European Union decision-makers said that they’d freeze other assets that Putin and Lavrov control indirectly.

At a press briefing, Jen Psaki, the White House spokesperson, said that following a telephonic conversation the President of the European Commission and US President held, and in alignment with the decision by their Western allies, America will come together in announcing sanctions on the Russian leader, Russian Foreign Minister, and Russian National Security team members. She added they’ll have more explicit details out later.

According to the Russian state-owned domestic news agency ‘RIA Novosti,’ Maria Zakharova, a spokeswoman for the Russian Federation’s Foreign Ministry, said the new sanctions against the two Russian officials reflected the ‘absolute impotence’ Europe in foreign policy. Additionally, according to the AFP News agency, global leaders are hardly ever the target of such direct sanctions. The only other leaders presently under European Union sanctions are the Syrian President and the Belarusian President.

We will introduce sanctions against Vladimir Putin and Foreign Minister Sergey Lavrov in response to Russia’s illegal and unprovoked invasion of Ukraine.

We will not stop inflicting economic pain on the Kremlin until Ukrainian sovereignty is restored.

Moreover, Alexander Schallenberg, Foreign Minister of Austria, said the action was a unique action in history toward a country that has a permanent seat on the United Nations Security Council, however, stated it displayed how combined EU member-states were in opposing Russian moves. The sanctions by the Union put announced against Lavrov and Putin are a part of extensive sanctions set that targets Russian banks close to the Kremlin, oil refineries, and the Defense industry of the Russian Federation.

However, the EU leaders accepted it was too early to impose a travel ban on the two top Russian Officials because negotiating channels need to be continued. And on Friday, Mr. Boris Johnson, Prime Minister of the U.K., called for countries to act more persuasively in announcing sanctions against the Kremlin. However, some European countries, including Germany, are uncertain about taking that action.

Ukrainian Foreign Minister Dmytro Kuleba said to some Western leaders who are still hesitant in a tweet that every year at commemorative happenings, you say “never again.” The time to prove it’s at present. Moscow is carrying on a horrific aggression war in the West. Annalena Baerbock, Foreign Minister of Germany, said that the set of banking sanctions the European Union passed would hit the Russian administration harder than excluding Moscow from the SWIFT international payments network.