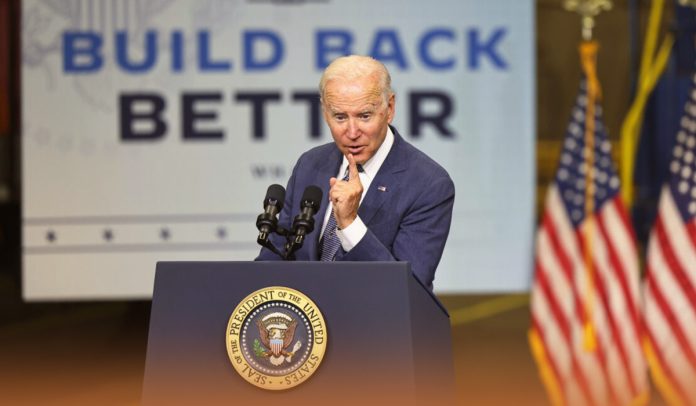 On Thursday, Joe Biden, the President of America, appeared to acknowledge that his Build Back Better Agenda might not earn approval from the United States Congress in the remaining weeks of 2021, saying Democrats would pursue to proceed the lawmaking over the coming days and weeks.

In a lengthy statement, President Biden implicitly acknowledged continuing talks with West Virginia Democratic Senator Joe Manchin, and procedural steps would cause Dems to miss the Christmas deadline for U.S. Senate passage of his 1.75T dollars economic and climate bill, noting that Dems would continue working together over the upcoming days and weeks to get the proposal to the US Senate.

The U.S. leader has been in talks with moderate Democratic Sen. Joe Manchin, who has withheld his vote for the bill, making him a key vote in the evenly split chamber. However, Biden stated that he believes that they’ll bridge their differences and advance the Build Back Better agenda, even in the face of fierce GOP opposition.

The Build Back Better Act will lower the core costs that have held Americans back for decades: on everything from health care and child care to prescription drugs and housing.

No Republican in Congress supports it.

Moreover, Biden said that Manchin had reiterated his vote for the total cost of the spending bill. He said conversations are ongoing, but more time is needed.

Moreover, Biden said Sen. Manchin has reiterated his vote for Build Back Better funding at the level of the framework plan he proclaimed in September. However, a person with the knowledge of conversations between Manchin and Biden, said the talks have been going poorly with the two ‘very far apart’ on the bill’s content.

Democrats, including Chuck Schumer, Senate Majority Leader, have been pushing to pass the sweeping bill by Christmas. But the party is facing some hindrances from Mr. Manchin, whose support of the lawmaking is key to its passage.

The U.S. President said he had spoken to House of Representatives Speaker Nancy Pelosi and Schumer regarding his most recent negotiations with Manchin and that he believes Joe Manchin is supporting the funding BBB agenda.

Senator Manchin has told the American President that the 1-year tax credit does not reflect the actual costs of the bill since the benefit will possibly be continually extended. If Dems want to include it in the agenda, he’s suggested it should be a ten-year extension, though that would blow up the cost of Build Back Better, which West Virginia Democrat wants to keep at 1.75T dollars.