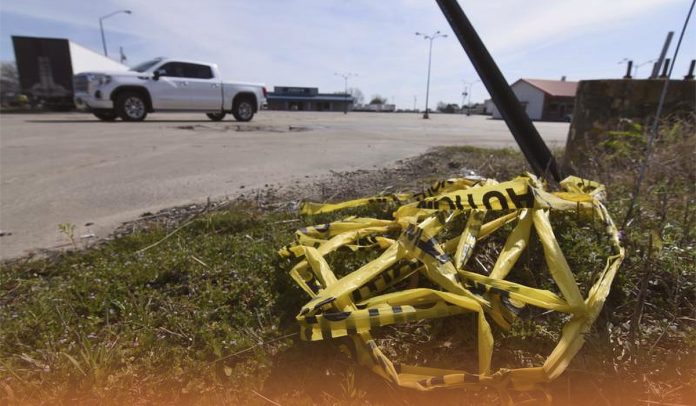 According to authorities, unfortunately, on Sunday, at least twenty-eight people, including seven children, were injured, and one man died in a shootout during a car show in Dumas, Arkansas.

A community event in Dumas, Ark. became a horror scene late Saturday, as the two individuals got into a gunfight and sprayed the gathering with bullets. The shooting killed one bystander and wounded twenty-eight other people. One of the event organizers, Ms. Candace McKinzie, 26, said that the violence broke out with startling quickness, according to survivors. McKinzie added, ‘you went from smiling and chatting and eating to random gunfire.’

Law enforcement says they’re searching for two suspects after the shootout. At a press briefing on March 20, law enforcement recognized the one killed as Cameron Shaffer, 23, from Jacksonville, a city in Pulaski County, Arkansas. Police said there was no sign that Cameron Schaffer had participated in the act of firing.

Arkansas State Police Director, Col. William J. Bryant, told the media that their prayers are with his family, relatives and also with all the relatives relatives of victims as a consequence of this happening.

Officers of the law believe that there was no mass shooting planned, with the violent incident triggered by two people who shot at each other around 08:00 PM ET on Saturday at the Car show hosted by the Hood-Nic Foundation.

According to the Dumas Police Department, it had one individual in custody on unrelated charges, and police are hunting two other suspects in link with the gunfight. But, he added: it is dreadful, they’ve a small farming community of five thousand people in Dumas and then ‘we’ve a violent incident’ of numerous victims.

Governor Asa Hutchison said that the Shooting rampage last night in Dumas represents a total disrespect of the value of life. They’ve at least gunfight victims, and eighteen have been admitted to hospital. Police have apprehended one of the two suspects. Hutchison added that as the inquiry continues, he’ll inspect specifics to comprehend if there’re any steps that could have been taken to avoid a tragedy like this.

Furthermore, Col. Bryant said in the press briefing that 5 kids of ages 8, 9, 11, 19, and 23 months were shifted to Arkansas Children’s Hospital after the violence, and that law enforcement was active to verify whether a sixth kid was also involved. Five children had since been discharged from the hospital after needed treatment, according to William J. Bryant.