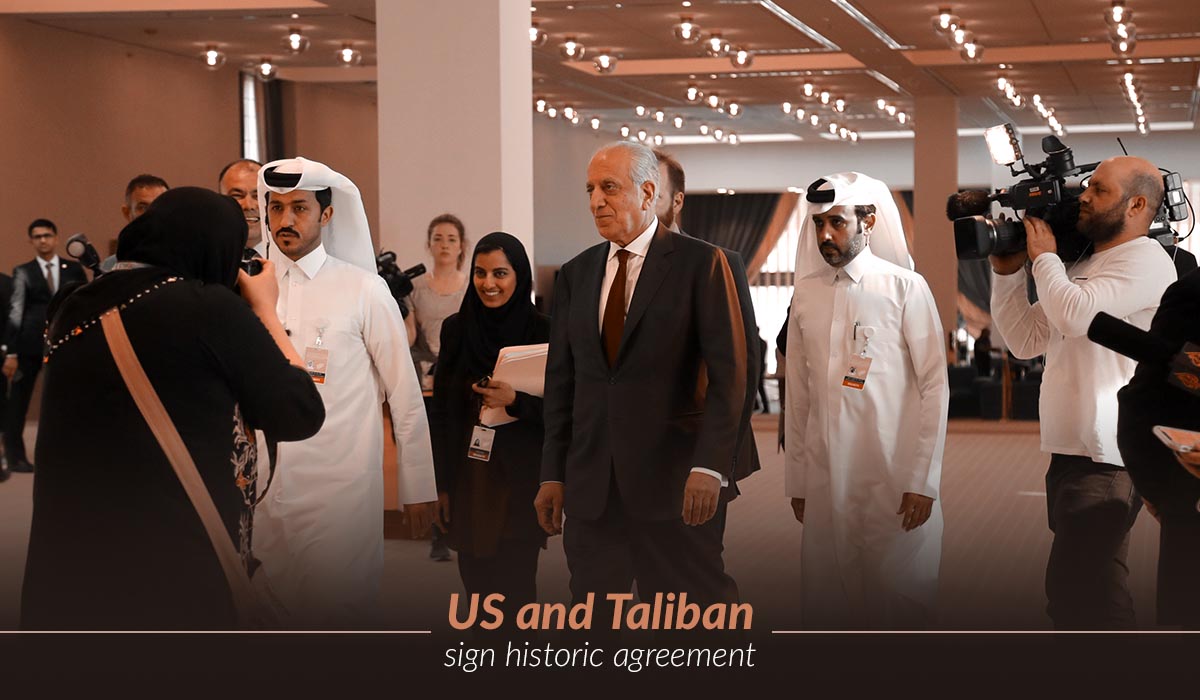 On Saturday, after a week’s depletion in violence, the Taliban and U.S. have signed an agreement that’s about to put back the American’s troops from the land of Afghanistan and is a way to end the longest American war.

Agreement was signed by special U.S. representative and Chief negotiator for Afghanistan Reconciliation named ‘Zalmay Khalilzad’, on the other side, Mullah Abdul Ghani Baradar was the chief representative of Taliban. Deal was signed in Doha, which is the national capital of Qatar. Mike Pompeo, the secretary of the state, witnessed the whole signing process.

Number of commitments and agreements were signed from United States to Afghanistan for bringing about peace and permanent ceasefire to Afghanistan.  In a news conference at Doha, Pompeo said that it’s a positive instant because it is only the beginning, but there are lots of hard tasks awaiting ahead in front of the diplomatic side.

According to the agreement text, “Afghani Taliban would initiate intra Afghan talks on 10th of March 2020.”

The first withdrawal of 8,600 troops would be done in the initial 135 days, written in the agreement. On the opposite side, American administrative has been facing stress about reducing the number of troops in the country that may cause conditions-based disaster.

American administration would closely observe the whole Taliban’s compliance with their commitments and also evaluate the Taliban’s actions against their withdrawal, said Pompeo in Doha.

On Saturday, Mr.President Donald Trump at the white house, while talking to reporters, said that he would meet personally with the Taliban’s leader as soon as possible in the next week, reported CNN. Trump even described that everyone wants this to happen. Besides, Trump also congratulates the American officials and all those who are engaged to the agreement, even the opponent mate.

A four-page agreement described that Afghani Taliban would resist any individual or any other group to use the land of Afghanistan against United States security and its allies.

Last week, a senior official from the administration said that American community has much concerned about the previous history between al-Qaida and the Taliban. Agreement even contains the release statement of 5,000 Afghani Taliban prisoners.

In another news conference, Pompeo said, if the Taliban community doesn’t follow their commitments, then the president and his administration will not wait to perform actions to protect American lives.

Mark Esper, the secretary of defense, said that Afghanistan deserves stability and peace security, in case only if they collaboratively avail of this opportunity.

On Friday, Donald Trump stated that if the government of Afghanistan and the Taliban sustain and follow the whole agreement and their commitments, then both nations would have a robust path to cease the war in Afghanistan and withdraw their troops home.

Saturday’s Doha agreement is a result of more than one year off and on negotiations with both sides. Khalilzad has already told, in early September 2019, that two sides had attained an “agreement in principle” position.

After this, Esper and Pompeo both have done full publication of the agreement, and they also said that American people prisoned by the Taliban should have full security and even their ally.

Text of Saturday’s Doha deal doesn’t have any particular dialect with respect to the civil society or women’s protection.  Moreover, Pompeo, in his remarks, said to the Taliban that they should follow the historic progress for girls and women that would be beneficial for all Afghans.

A senior official from the administration described to news reporters that during negotiations, women would also have a seat at the table. Another administration official also told that upcoming March talks are probably to happen in Oslo, Norway.

Another senior administration official recognized that in the previous week that the upcoming path wouldn’t be perfect or easy due to previous drastic conditions of both territories.