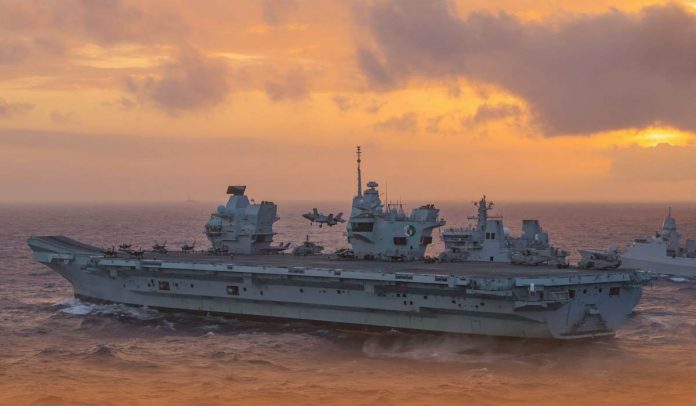 The United Kingdom Ministry of Defense said a British F-35 combat jet based on HMS Queen Elizabeth, the lead ship of the Queen Elizabeth-class of aircraft carriers and the Fleet Flagship of the Royal Navy, crashed into the Mediterranean Sea on Wednesday, November 17, during a routine flight operation. The pilot ejected and rescued on a Merlin search and rescue chopper and returned safely to the carrier. The

The £100M F-35B short take-off, vertical-landing aircraft plunged into the eastern waters between Cyprus and Egypt during a routine operation on Wednesday morning at 10:00 GMT. In addition, ten United States marine F-35B’s are deployed on the aircraft carrier.

According to the U.K’s Defense Ministry, an inquiry of the happening had started and said it would be inappropriate to give any comment at this time.

Ben Wallace, State Secretary for Defense of the United Kingdom, the aircraft came down soon after take-off. But, he added, they’re contented the pilot is safe, well, and back on board the carrier. Wallace said the training and operational flights onboard HMS Queen Elizabeth are continuing in spite of the crash event.

British operates the Lockheed Martin F-35 Lightning II, a single-engine, short take-off and vertical landing variant of the United States developed stealth plane, which costs around £100M each to build. The F-35B is packed with highly sensitive data and technology.

There are eight British F-35B’s and ten from the United States Marine Corps on the carrier. They’ve conducted about two thousand take-offs & landings onboard the carrier without any significant incident over the recent 6-months.

The America-designed stealth aircraft, hard to detect on radar, is one of the costly defense projects undertaken by the United States military. That is the first time an RAF F-35 has crashed, but there have been some involving American planes.

Previously, fighter jets from the HMS carrier participated in raids against the remnants of ISS in Syria and Iraq.