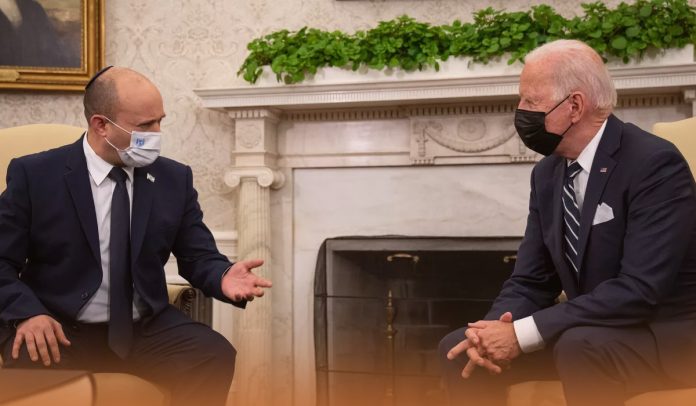 Joe Biden, the United States President, told Naftali Bennet, the Prime Minister of Israel, in a call that he’s looking forward to visit Israel later in the year, according to the White House statement. During the call, the two leaders also conversed the threat posed by the Islamic Republic of Iran, and Mr. Biden conveyed ‘firm support for Israel’s security’ and strong support to replenish the Israeli Iron Dome Air Defense system. In addition, the White House said that the leaders debated concern that Moscow is planning to invade the East European country of Ukraine.

US president Biden has accepted Israel PM Bennett’s invitation to visit Israel, and will make the trip “this year” – WH

According to the White House statement, Joe Biden emphasized his vow to encourage stability in the Middle East, including Palestinians and Israelis enjoying equal measures of freedom, security, and prosperity. On Sunday, he told the PM of Israel that he would visit his country later in 2022.

Furthermore, Biden and Bennet debated the anti-terrorism raid in northwestern Syria that led to the killing of Abu Ibrahim al-Hashimi al-Qurayshi, the leader of the Islamic State of Iraq and Syria. It has been the major US operation in the country since the 2019 operation killing ISIS leader Abu Bakr al-Baghdad. Israeli leader praised the US operation and said that the world is now a secure place; Bennet expressed thanks to the courageous raid of the American forces, according to the Israeli administration.

‘peace, prosperity for Palestinians and Israelis’

According to the call readout released by the White House, Joe Biden and Naftali Bennet discussed the likelihood of added Moscow hostility against the onetime Soviet Republic.

The two leaders first met in the Oval Office in August when Mr. PM said that he sought after to bring the new essence to the ties between the two administrations. Mr. Bennett said at the time that a new spirit of friendliness, a spirit of hope, graciousness, and honesty, a spirit of harmony and bipartisanship, of folks who harbor very different political sentiments, even contrasting, yet they all share the deep desire to come together to build a better future for Israeli State. Bennet said after the meeting that they’d reached an agreement to pursue a shared strategy to avert Iran’s nuclear plans.

America is following through diplomacy for a likely return to the 2015 Iran Nuclear Accord withdrawn by ex-US President Donald Trump. However, the U.S. leader spoke in only broad terms during the summit regarding other regional matters, saying he deliberated to converse ways for amplified prosperity, peace, and security for Palestinians and Israelis. Moreover, Mr. Biden said America will always be steadfast to Israel. It is a firm partnership between their countries.