With the death of a 5-year-old kid facing the complications due to COVID-19, he becomes the youngest victim of the coronavirus to die in the United Kingdom. Whereas around 708 also died in a single day due to epidemic and with this figure, Britain faced its worst day w.r.t causalities since the outbreak hit the kingdom. Yesterday’s record upsurge in death toll brings Britain’s fatalities to around 4,313, while the no. of new infections in the kingdom increase by 3,735 to 41,903 – the lowest twenty-four-hour increase of infected cases is last four days.

A five-year-old child becomes the youngest victim to the novel coronavirus in the UK as the nation suffers worst day yet in coronavirus crisis with 708 dead, taking the total toll of the virus to 4,313. With 3,735 more cases in the last 24 hours, the total cases rises to 41,903. pic.twitter.com/DequQ4RiFK

Stephen Powis, the national medical director at NHS England, told the No10 news briefing that the up-to-date figures suggest that the rate of infection due to COVID-19 started to stabilize as the number of fresh cases slowed.  However, he warns that there is still no space for complacency, and he advises people to firmly follow the lockdown rules, including avoiding gathering at the United Kingdom’s parks as well as beaches this sunny weekend.

Professor Powis says that they are optimistic that some of the changes they perceive in infections and possibly in hospitalizations are now giving back the benefits of the social distancing guidelines at public places. It will be seven days or fourteen days before the precautionary measures they took to lower the hospitalization rates. However, during the last few days in London, there has been a little bit of a plateauing in terms of numbers.

300 Ventilators reached in the U.K. from China

Michael Gove, the Cabinet Office Minister, confirmed that they recorded the biggest rise of cases in the Midlands at 47%, while the North East and Yorkshire experienced a 35% rise. Moreover, the Chancellor of the Duchy of Lancaster, Michael Gove, revealed that the U.K. took delivery of three hundred ventilators from China, whereas soon, they started producing a consortium of aerospace, F1 teams, and engineering. He says that they are in the process of acquiring ventilators from partners in foreign countries, including Switzerland and Germany. Yesterday three hundred ventilators arrived in Britain from China.  Furthermore, he thanked the government of China for their support. 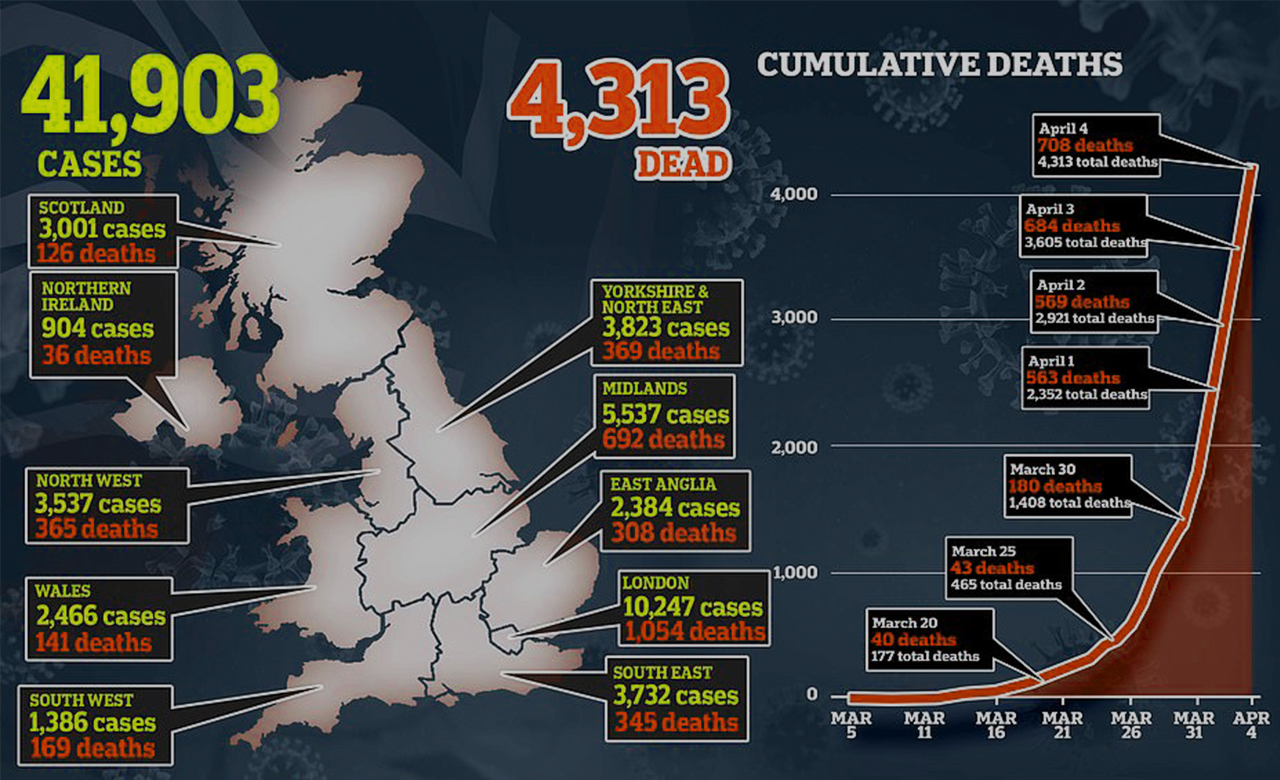 Grove also expressed that the U.K. Government encouraged the ventilator manufacturing companies, including Rolls-Royce and Dyson, to increase the ventilator numbers for patients of coronavirus. He clarified: More ventilators are coming into production in the upcoming few weeks, subject to governing approvals and safety, as part of the call of the Prime Minister, Boris Johnson, to manufacturers to increase production. The surge in hospital admissions is raising fears as earlier this month, that local hospitals may see a spark in new admissions just like in London, the epicenter of England’s COVID-19 outbreak.

The Midlands faced the impact of new mortalities, with 212 deaths related to 127 in London. The North West had ninety-seven, whereas Yorkshire and the North East had seventy-three, the East seventy, the South East forty-one, and the South West seventeen. According to the Scottish Government, the deaths due to COVID-19 in Scotland escalate by 46 to 2018. Causalities in Wales surge by 13 to 154 and rose by 8 to 56 in Northern Ireland, according to Public Health Wales.

Professor Neil Ferguson’s modeling is guiding the strategy of Whitehall. He braced the community for several weeks of high case numbers – though new cases will start to plateau in around ten days. In the light of hope, he hinted at the end of next month might relax implementation on social distancing if citizens follow the lockdown guidelines. Grove said that surely the public would maintain the social distancing until it needed by using their self-discipline.

Number of coronavirus infections per day in the U.K.

Number of Deaths in the U.K. per Day amid coronavirus

Ministers across the kingdom were pleading the citizens to stay at home and keep the discipline, so the NHS doesn’t overcome the increasing number of COVID-19 cases. On 3rd April, the United Kingdom reached a miserable milestone in its health crisis when the mortality rate beats the number reported by China, the epicenter of the novel coronavirus. Grove also discarded the conspiracy theories associating with 5G telecommunications masts to the COVID-19 spread as dangerous fake news and called it false during the No10 press briefing.

According to Professor Powis, the 5G conspiracy theory was fake news with no scientific support, and it damages the emergency response to the epidemic. The 5G idea is entirely rubbish and nonsense, and it is the foulest type of fake news while mobile phone networks are unconditionally critical for the whole community.

Read Also: UK administration will pay 80% of salaries as it closes pubs amid Coronavirus