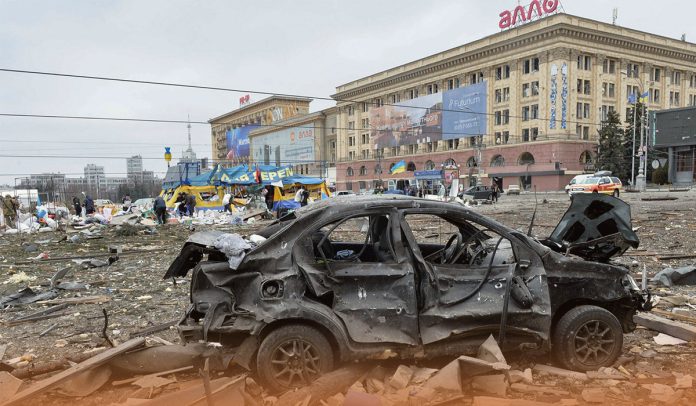 Volodymyr Zelenskyy, the President of Ukraine, has accused Kremlin of potential war crimes after it carried out air raids on the northeastern Ukrainian city of Kharkiv. According to an emergency services official, at least ten people lost their lives, and thirty-five were injured when a concert hall, an Opera House, and administration offices were heavily hit in Freedom Square (Svobody Square) on March 1.

Russian troops had also parachuted in Ukraine’s second-largest city in an attempt to take control of the besieged city, according to the Ukrainian Armed Forces. In addition, it said that there’re immediate clashes after the landing of Russian paratroopers. The main TV Tower on Oranzhereina Street, Kyiv, was also struck by a Russian missile earlier on Tuesday, ending the media broadcast and killing five innocent people.

Russia warned people living near military areas of the Ukrainian capital to leave their residences. The blast sent smoke billowing from a 385 m-high lattice metal tower, but the tower remains standing. An adjacent memorial to sufferers of the Holocaust was also hurt in the same attack. The Babyn Yar, a ravine in Kyiv, is the largest Holocaust mass grave in Europe, where over seventy thousand people, including 33K Jews, were killed by Nazis on 29-30th September 1941.

To the world: what is the point of saying «never again» for 80 years, if the world stays silent when a bomb drops on the same site of Babyn Yar? At least 5 killed. History repeating…

Furthermore, satellite imagery by the U.S. space technology firm Maxar Technologies showed that the Russian Army convoy was moving towards the capital of Ukraine due to worries of a fierce attack on Kyiv. But, according to a senior defense official of the United States, there’d been no substantial movement by the 64-kilometer military convoy on Mar. 1.

Additionally, there’re signs that the morale of Russian forces was flagging on the whole, and some military units were conceding, sometimes without opposition, according to a US official. In other developments, oil prices have increased to a 7-year high, in spite of new attempts to calm markets. The US multinational firm Apple has halted selling iPhones and all its other products in the transcontinental country of Russia.

Ukraine, a one-time Soviet country, also reported that forces from Russian ally Belarus – a landlocked country bordered by Russia to the East and Northeast – had entered the North Ukrainian Chernihiv region. Russian military North of Ukrainian capital are being closely watched worries of an attack on Kyiv. However, UK intelligence and American defense officials said the Russian convoy hadn’t made significant progress toward the capital city in the last few days.

Ukrainian President Zelenskyy asked West in a speech to the European Union parliament to prove Europe is with them and prove that they’ll not let Ukrainians go. Later, the EU parliament stated it would carefully observe the request by a post-Soviet country to make it a member of the EU. Zelenskyy condemned the strikes on Kharkiv as “state terrorism on the part of Russia.”