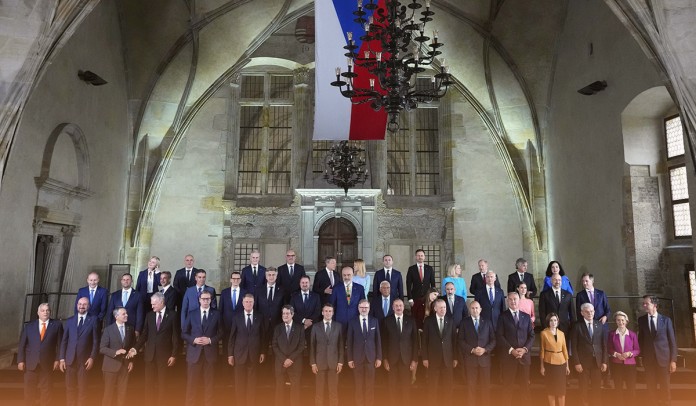 On Thursday, the Western leaders hailed their united front against Moscow’s brutal and unjustifiable war on Ukraine at a summit meeting that also saw the leaders of two old regional foes, Armenia and Turkiye, meet in-person for the first time since they agreed in 2021 to end decades of bitterness behind and establish diplomatic relations. Volodymyr Zelenskyy, the President of Ukraine, also joined the Prague Summit virtually.

The inaugural summit of the European Political Community (EPC) – an intergovernmental organization for strategic conversations about Europe’s future – brought together the European Union, a supranational political & economic union of twenty-seven member countries, aspiring associates in the Eastern European region and the Balkans, as well as neighbors like the United Kingdom.

Putin’s Russia was the one major European power invited to the Summit at Prague Castle in Czechia, along with Minsk, a landlocked country bordered by Russia to the East & Northeast, and also a supporter of Putin’s war against Ukraine. The war has caused high inflation and an energy crisis, that are creating chaos in Western economies.

Furthermore, the current President of the European Council expressed gratitude to Mr. Zelenskyy for joining the first EPC Summit. Europe is with him and the brave people and forces of Ukraine.

At a time when Europe’s stability and security is being threatened, we need more dialogue, more listening, more mutual understanding, not less.
And that’s what we achieved at the first #EuropeanPoliticalCommunity pic.twitter.com/eu9Si9JfgR

According to media reports, Kyiv said it had regained broad swathes of land from Moscow forces in Ukraine’s Southern region as Russia’s dissatisfaction has been growing regarding handling the Russo-Ukrainian war. The Armed Forces of Ukraine have recaptured approximately 193 square miles of land and several towns and villages in the southern Kherson area alone since October 1, according to the Ukrainian leader.

Mr. Zelenskyy said in a virtual address that there have also been more significant gains in the country’s eastern region. The battlefield successes recorded in southern Kherson are the newest in a string of Moscow losses weakening Russian assertions to have annexed more than 15 percent of war-torn Ukraine.