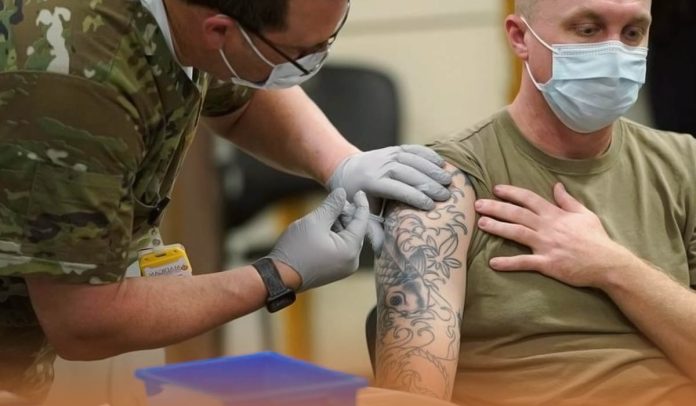 According to the Air Force data released Nov. 3, about 8500 active-duty Air Force Airmen and Space Force guardians have missed the deadline of Nov. 2 for getting inoculated against COVID-19, including eight hundred who verbally refuse the jab and almost a thousand with pending requests for a religious exemption.

The officials stated that the US Air Force granted around 1866 exemptions, including 1634 as medical and two hundred and thirty-two for administrative motives like leaving the military forces. Not a single request for religious exemptions is approved, but 4933 are pending.

The Air Force said of its 326,000 active-duty members — nearly 800 flat-out refused the Covid vaccine and a whopping 5K are reportedly pending requests for religious exemptions from the jab. pic.twitter.com/7DtmqzsuDN

According to the officials, over 10300 Air Force and Space Force members remain uninoculated. That number includes almost 2753 who haven’t begun receiving the jab, haven’t applied for any exemptions, and even haven’t described they’re refusing the vaccine.

Refusal to Vaccination Without Approved Exemption Might Be Punishable

Chief of Staff of U.S. Air Force, Charles Quinton Brown Jr., said that their airmen need to be ready to operate anytime, anywhere worldwide. Getting protected against the COVID-19 confirms they’re a ready force.

Ann Stefanek, the spokeswoman for the US Department of Air Force (DAF), said that an inoculated force is a protected force, well able to position and defend their interests anytime, anywhere. Moreover, she said that the coronavirus jab is essential to keep their people safe and healthy.

A US Defense official told the news outlet earlier in the week that any denial to get the COVID jab, absent an appropriate administrative or medical exemption, might be disciplinary under the federal law known as the Uniform Code of Military Justice (UCMJ).

Since the start of the COVID-19 pandemic, the US Air Force and US Space Force have recorded 43717 COVID-19 infections, and unfortunately, 6 have lost their lives.

The COVID-19 inoculation deadline for the Air Guard and Reserve is 2nd December.