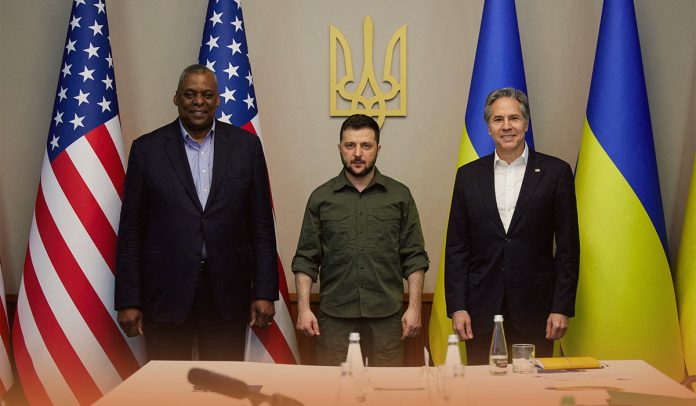 The United States officials said that on Tuesday, April 27, America will host more than forty countries for Ukraine-linked talks focusing on weaponizing the embattled country so Kyiv can protect and defend its land and people against Russia’s unfolding and possible critical offensive in Ukraine’s East. Lloyd Austin, the US Secretary of Defense, is holding the talks on Tuesday at Ramstein Air Base, an American Air Force base in Rhineland-Palatinate, a state in southwestern Germany, following a visit to the Ukrainian capital where he promised more security and military assistance to Ukrainian leader’s war effort.

The United States Army general who is serving as the Chairman of the Joint Chiefs of Staff, Mark Alexander Milley, said that a fundamental goal of the event was to synchronize and coordinate increasing military aid to the Ukrainian military including heavy and sophisticated weapons, such as 150mm Howitzers, armored vehicles, as well as shells and Switchblade drones.

Moreover, Milley told the media-persons traveling with him that the coming several weeks would be very, very crucial. Describing the purpose of the talks, he said Ukraine needs a continued supply of weaponry to be successful on the battleground. Oleksii Yuriyovych Reznikov, Ukraine’s Minister of Defence, and Jens Stoltenberg, Secretary-General of NATO, are likely to attend the Tuesday’s talks.

The Ukraine-related talks follow a visit by Antony Blinken, the U.S. State Secretary, and Lloyd Austin, the U.S. Secretary of Defense, to the Ukrainian capital city, Kyiv, where they vowed additional security help for Ukrainian forces to strongly resist the Russian aggression.

In addition, the American officials pledged to continue to gather other world countries to contribute and send military support to Ukraine.

Furthermore, after returning from Kyiv, Ukraine, Antony Blinken told the media in Poland that while the Kremlin is making efforts to brutalize the post-Soviet state of Ukraine, Ukrainian military forces are confronting with solid resistance against the Russian military’s brutality, and they’re doing that with the assistance that US and other world countries have coordinated.

Mr. Austin told the military leaders in Germany that Zelenskyy’s military forces’ firm resistance had brought encouragement to the free world and even stronger determination to the Western military alliance and that the Russian leader never imagined the world as a whole would gather to support Ukraine so swiftly and confidently.

According to a Senior American Official, they intend to make over USD 713 Bn in foreign military funding, which includes support for Ukrainian forces and fifteen other partner countries in the Eastern and Central European region in the Balkan Peninsula.

Moreover, it would deliver backing for the capabilities Kyiv needs, particularly for the battle in the southeastern Ukrainian region of Donbass. With the latest support in foreign military financing, America could’ve committed nearly 3.4B dollars in security and military aid to Ukraine since Russia’s all-out incursion started and over 4.3B dollars since President Joe Biden took office on 20th January 2021.