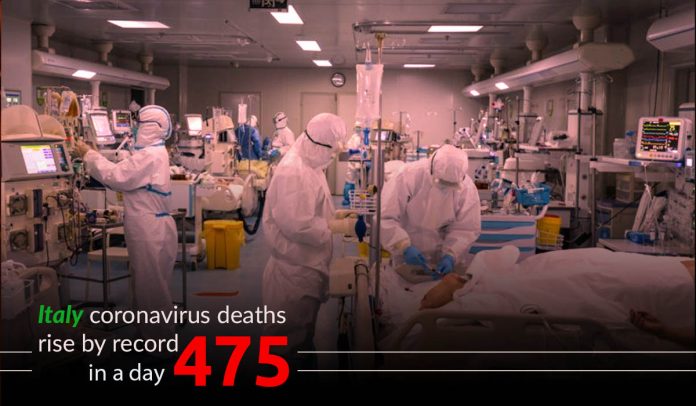 The number of coronavirus deaths in Italy risen to a record 475 in a single day, adding total to around 3,000 – the largest increase since the epidemic. There are almost 35,713 overall confirmed cases reported in Italy, whereas over four thousand infected individuals successfully recovered from the pandemic. Lombardy recorded as the worst-hit region in northern Italy, with 319 deaths in one day.

After China, Italy is the most affected country in the world as a minimum of 8,758 individuals died globally, with the maximum death ratio in China. According to the World Health Organization (WHO), the majority of the over twenty-thousand confirmed cases, about 80% happened in Europe and the Western Pacific region, which includes the majority of Asia. Moreover, several countries across the world took extreme measures, including social distancing, lockdown cities, and canceling of major global events to make resistance in the way of virus transmission and to lessen the pressure on the health system.

Tedros Ghebreyesus, the chief of WHO, said on Wednesday, to defeat and control coronavirus, countries must trace, isolate, test, and treat the patients. Due to the worst spread of the epidemic in the country, the whole of Italy lockdown by the authorities for about fourteen days to control its transmission. The officials asked the nationals to stay at home, whereas the number of deaths in Italy continued to spike.

“WHO continues to call on all countries to implement a comprehensive approach, with the aim of slowing down #COVID19 transmission and flattening the curve.

Mike Ryan, the emergency director of WHO said this was possibly due to the shocking number of cases within the health systems, along with the huge number of elderly individuals in the population at large.  Dr. Tedros greeted the start of the first vaccine trial to kill the virus after the rise of the virus as an incredible achievement.

“The first vaccine trial has begun, just 60 days after the genetic sequence of the #coronavirus was shared. This is an incredible achievement.
We commend the researchers around the world who have come together to systemically evaluate experimental therapeutics”-@DrTedros #COVID19

Earlier this week, the first vaccine human trial started in the United States in Seattle at the Kaiser Permanente. However, health experts warn that it will be several months before that they will say the vaccine will work.

The worst situation in the Rest of Europe

Over 13,720 infected cases recorded in Spain with at least 598 deaths. An investigation will launch into the deaths of a minimum of seventeen residents of a nursing home in Madrid, where a large number of coronavirus cases reported. The number of confirmed COVID-19 cases raised by over 16% in France on Tuesday, hitting 7,730, whereas the death toll grew to 175, with seven percent of the dead aged under sixty-five. The death number reached 104 in the United Kingdom.

Germany has 8,200 cases and twelve deaths. During an TV address, Angela Merkel, the Chancellor of Germany, encouraged the Germans to follow the restrictions intended at fighting the pandemic. She said that since German reconsolidation after World War II, they never face a severe challenge like this. Belgium has 1,490 cases, with fourteen deaths.