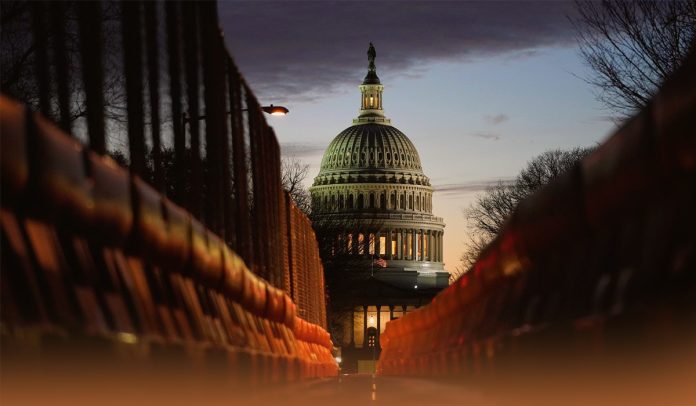 On Thursday, the United States Senate voted 65-27 to pass a stopgap measure to prevent a shutdown at the week’s end before an imminent Friday deadline when federal administration funding has set to expire. Last week, the House of Representatives approved 272-162, the continuing resolution (CR) to extend the funding of the U.S. federal government through 11th March. Now that the upper chamber has approved the bill, it could be moved to President Biden’s desk to be signed off into law.

Furthermore, the U.S. legislators are working to lock in a comprehensive full-year spending measure but have stated they need additional time to finish and, as a result, needed a partial funding extension to prevent a shutting down at the week’s end.

In the U.S. Senate, Democratic absences and GOP demands threatened to confuse the attempts to lock in a concluding vote and brought action down to the wire as the 18th February deadline approached. However, leaders from both sides anticipated confidence there wouldn’t be a government shutdown, and eventually, final support to pass the bill proceeded late Feb. 17.

Before holding a final vote on the stopgap measure, the upper chamber took 3 votes on amendments put forward by GOPs, but all failed. Two of those modifications would’ve prevented the money for jab mandates, while the other modification would’ve implemented a balanced budget requirement.

Previously on 17th February, when negotiators were making an effort to lock in the timing for the final vote, Dems were already struggling with absences among their members, making it difficult in the closely split 50-50 Senate. In addition, if any amendment votes had approved, it could have risked hard work to take the measure to President’s desk ahead of the funding expires.

Arizona’s Senator Mark Kelly missed the vote on Wednesday due to his wife Gabby Giffords’ illness. And Senator Dianne Feinstein, 88, was out on the day because her husband is sick, according to the source having knowledge of the matter. Additionally, she’s not likely to return this week. Moreover, New Mexico’s Sen. Ben Lujan is still absent after he’d a ‘mild’ stroke, and fortunately, he’s recovering.

Through the love and support from my family, medical team, and New Mexicans, I’m getting stronger each day in D.C. where I’m completing my recovery.

I’m thankful for the well wishes from folks across the country. I’m back at work and will return to the Senate floor soon. pic.twitter.com/GOoWb86K7q

And South Carolina’s Sen. Lindsey Graham, a GOP, is also absent, traveling abroad. An amendment by U.S. Sen. Mike Braun from Indiana requiring the federal administration to balance its budget in a decade was also forbidden with forty-seven votes to pass and forty-five votes against, falling short of at least sixty votes to pass it.