On Thursday, Jens Stoltenberg, Secretary-General of NATO, said that the intergovernmental military alliance has the joint tasks of both assisting war-torn Ukraine in its defense against Moscow’s barbarity and to avoid the brutal conflict from spreading into a war between the North Atlantic Treaty Organization – military alliance between two North American and 28 European states – and the Russian Federation.

Stoltenberg said at a summer camp in Norway that the Western military alliance has a moral obligation to support and assist innocent Ukrainians who have been put through a military conflict. According to a NATO Secretary-General’s speech, they’re seeing acts of war, attacks on Ukrainian civilians, and vandalization not seen since the Second World War. He added they couldn’t be indifferent to that.

In addition, NATO Chief said the world would be a more dangerous place if Kremlin gained what it wanted through its so-called special military operation. If Moscow wins this brutal war, he’ll have proof that ferocity and violence work. And then other neighboring states might be next. He added that a more dangerous world means we’ve to invest more in defense and security.

Furthermore, on Thursday, the Armed Forces of Ukraine said that the Russian military was bombarding numerous areas in the East European state, including those around Chernihiv in northern Ukraine, northeastern Kharkiv, and Slovyansk in Donetsk’s Kramatorsk district.

In the meantime, the United Kingdom’s Ministry of Defense said that the military forces of Ukraine were employing missile attacks against Russian garrisons, ammunition supply points, personnel clusters, and logistics support areas. According to a statement from British Defense Ministry, such attacks were anticipated to have a massive impact on Moscow’s attempts to resupply and assist its troops.

On Friday, the Turkish Ministry of Defense said that three more vessels with grain have left the Black Sea ports of Ukraine and are on the way to Turkey for inspection, evidence that a United Nations-brokered agreement is working to send Ukrainian grain that Moscow’s full-scale incursion has struck.

According to the media, the three vessels are loaded with more than fifty-eight thousand tonnes of corn. Experts say that much of the Ukrainian grain exports is used as animal feed. 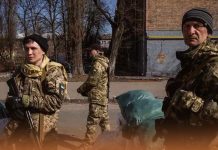