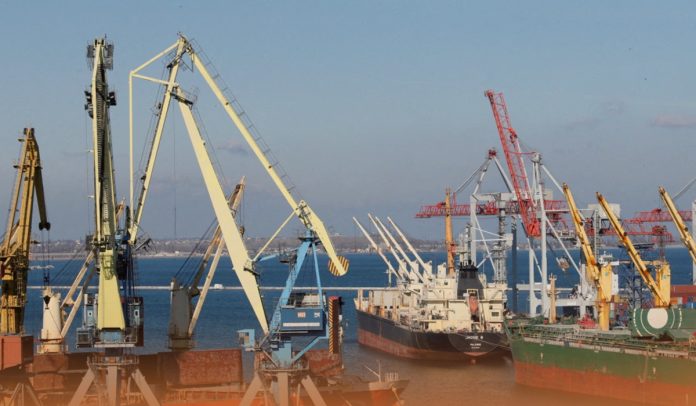 According to the Ukrainian officials, the Armed Forces of Russia have launched missile attacks on Odesa, the port city on the Black Sea in southern Ukraine, as the Kremlin attempted to interrupt critical arms and equipment shipments and supply lines into the East European country in the eleventh week of ‘unwinnable’ grinding war.

Russian military forces fired missiles at the Black Sea city of Odesa, killing one person and injuring five, as Volodymyr Zelenskyy, the President of embattled Ukraine, cautioned about the blockade of the country’s port like it was threatening global food supply. He requested the world community to take action to prevent the Russian blockade of Odesa in order to permit wheat deliveries and avoid a world food crisis.

In a Facebook post on Monday, Ukrainian Armed Forces said that in the major Black Sea port city of Odesa, missiles struck a shopping center and a warehouse, taking the life of one person and wounding five others. Videotape from the area showed fire and emergency workers carefully searching through the rubble.

Moreover, Zelenskyy’s Ukraine and its allies and partners have escalated efforts to clear ports or provide alternate routes for exporting its major crops of grain, corn, and wheat, as Ukraine is home to one-fourth of the world’s chernozem, also called black earth, which is very fertile.

According to the Ukrainian officials, the country’s security and armed forces had regained four villages near the northeast Ukrainian city of Kharkiv and pushed aggressive forces back toward the Russian border. The President of Ukraine thoughtfully offered what he called good news in his address late on May 11, saying the invaders are progressively being pushed away.

Earlier on Wednesday, the leader of Ukraine also tweeted his thankfulness to the US House for passing a bill approving about 40 Bn dollars in further security, humanitarian and financial assistance for brave Ukrainian people and forces.

I thank @SpeakerPelosi and all friends of 🇺🇦 in 🇺🇸 House of Representatives for the quick approval of the law on additional financial support for our state initiated by @POTUS. We are looking forward to consideration of this important document for us by the Senate.

The US House vote comes after Joe Biden, the President of America, urged Congress to immediately approve a new Ukrainian assistance bill as he alerted that remaining aid would soon come to an end. He also said to get the measure to his desk in the coming days. He primarily requested 33 Bn dollars to assist Zelenskyy forces as they fight off Russian aggression, but the US governing body has proposed extra billions for security and food for the people of Ukraine.