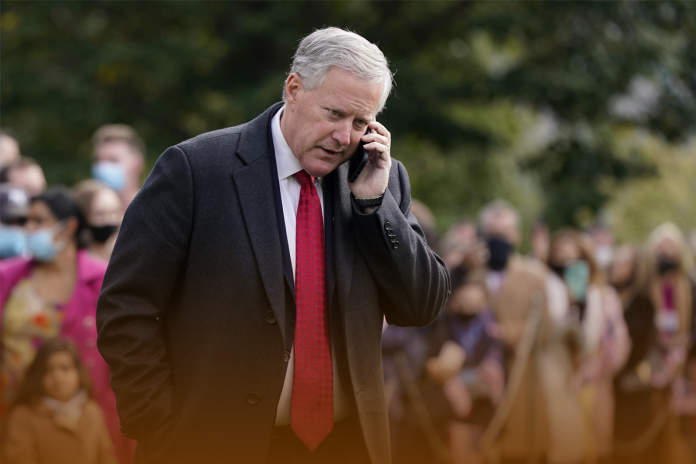 Mark Meadows, Donald Trump’s White House Chief of Staff, has satisfied the obligations of a subpoena by the US Department of Justice (DOJ) inquiring into the origins of the deadly Capitol Hill insurrection, according to the people having knowledge of the matter. Respecting the DOJ’s request to support the Capitol attack investigation made Mr. Meadows the top-ranking Trump official known to have answered to a writ issued in the federal inquiry.

According to journalists, Mark Meadows provided the same records and information he handed over to the US House Select Panel to probe the 6th JAN Capitol attack, complying with the DOJ’s subpoena.

The Jan. 6 deadly riot by the violent followers of the former American President led to several deaths, wounded law enforcement officers, and interrupted the legal certification of Joseph Robinette Biden Jr.’s win in the 2020 Presidential election.

In 2021, an ex-White House official produced thousands of e-mails and texts to the January 6 Select Panel before he halted cooperation with the House panel. The messages Meadows produced between November 3, 2020, and January 20, 2021, indicated communications at the White House, though Meadows retained several texts asserting executive privilege.

Along with Mark Meadows, Bens Williamson, the former Senior Communications Advisor, was also issued a subpoena from the Justice Department, according to people knowing the matter. The writ issued to him was similar to what others in Donald J. Trump’s circle got. That subpoena requested documents linked to the Capitol assault and unsuccessful attempts to subvert the Presidential election results.

Mr. Williamson, the former Communications Advisor to Mark Meadows, previously complied with the House Select Panel. But he refused to provide any statement. Moreover, an attorney representing Mark Meadows, George J. Terwilliger III, didn’t immediately reply to a request for a statement.

Furthermore, the ex-White House Official’s compliance with the DOJ’s call comes as the federal executive department has expanded its inquiry associated with the insurrection day, which now reaches Trump’s aggressive efforts to tilt his election defeat from nearly every point of view. According to media reports, those aspects include the drive to push unfounded assertions of ballot fraud, alternate electors’ plot, and the way funds were raised and spent to support those unprecedented efforts.

In the recent week, US federal investigators have subpoenaed more than thirty people with connections to former President Donald Trump’s fund-raising and his campaign operations. The individuals recently requested for information include William Stepien, the former White House Political Affairs Director, and Presidential campaign operations director Sean Dollman. However, both declined to provide any statement at the time.