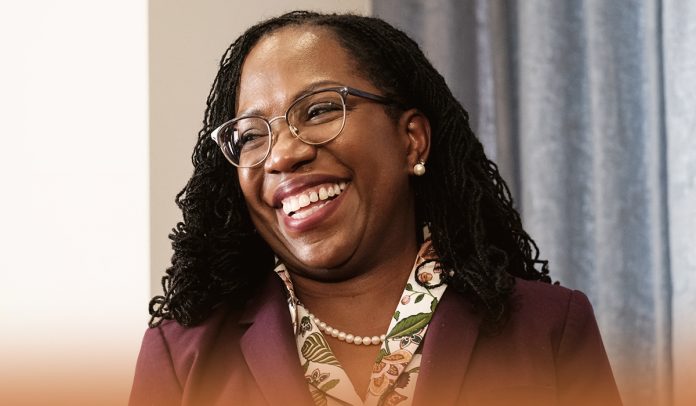 On Monday, April 4, the United States Senate voted to bring the U.S. Supreme Court nomination of Judge Ketanji Brown to the floor for the final vote of the full Senate, clearing a procedural hurdle after the Judiciary Committee deadlocked earlier on the day on forwarding her nomination.

Democrats and GOPs are deadlocked in the United States Senate Judiciary Committee over whether to confirm Judge Ketanji Brown Jackson to the Supreme Court of the United States, but her history-making nomination is still likely to be approved by this week’s end. Ms. Jackson would be the first Black female Justice to sit on the SCOTUS, as the 11/11 Senate Judiciary Committee vote on the Fourth of April smoothed the path for the incumbent rulers to advance her SC nomination to a full Senate vote, where they hold a thin 51/50 majority.

Tonight, the Senate has taken the next step to move forward on the nomination of Judge Ketanji Brown Jackson—this brilliant, this resoundingly qualified, this historic nominee to the highest court in all the land.

Moreover, on Monday, the senior U.S. GOP Senator for Alaska, Lisa Murkowski, and a junior U.S. GOP Senator from Utah, Mitt Romney, said that they’d support to confirm Ketanji Jackson, joining their colleague Sen. Susan Collins from Maine, who recent week became the first GOP in the U.S. Senate to declare favor for the nomination.

Chuck Schumer, Majority Leader of the U.S. Senate, a Democrat, said just before the Senate Judiciary Committee action that he’d set in motion the process that would bring about a final vote of the full chamber later in the week to confirm Ketanji Brown Jackson. Moreover, if confirmed, she would join the liberal group on the country’s highest court with a 6/3 conservative majority.

According to media reports, confirmation hearings fourteen days before had exposed sharp differences in the opinions among Dems and GOPs towards the SCOTUS and the confirmation process of the Senate, which has become a partisan battleground in the last years.

The incumbent party members much-admired Jackson’s qualifications and record as a federal judge on the US Appeals Court for the District of Columbia Circuit while hailing her historic nomination. GOPs sought hostile lines of questioning and attempted to paint the SC nominee as a detrimental liberal activist.

On April 4, the President of America said on Twitter that Jackson deserves to be confirmed as the next Supreme Court Justice.

Judge Jackson will bring extraordinary qualifications, deep experience and intellect, and a rigorous judicial record to the Supreme Court.

She deserves to be confirmed as the next Justice.

Chair of the Senate Judiciary Committee, Dick Durbin of Illinois, noted in his opening statement before the Monday vote that the committee had previously voted to confirm her to United States posts thrice. Dick Durbin lamented what he called unjustified attacks by some GOPs.