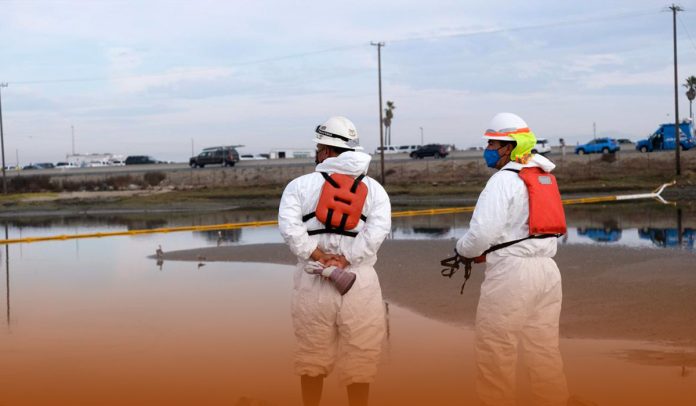 The United States Coast Guard (USCG) received the initial report of a major oil spill off the Southern Californian coast forced Huntington Beach half-day before a firm informed the major leak in its pipeline and a cleanup effort was started. Gavin Christopher Newsom, the governor of California, declared a “state of emergency” in Orange County, directing state authorities to take on immediate and forceful action to clean up and reduce the spill’s effects.

Kim Carr, Huntington Beach Mayor, said Saturday that a leak from an offshore oil production facility seeped out about 126000 gallons (3000 barrels), but late Monday, federal and state authorities refreshed about the possible oil spill amount to about 144000 gallons (3429 barrels). According to the officials, the leak is anticipated to have occurred nearly 7.25 kilometers offshore.

Kim Carr said that the USCG was informed of the spill at around 09:00 AM on Saturday. The city of Huntington Beach proclaimed in a news release on early Sunday morning that the oil reached the shore, and it had entered the Santa Ana River Trail and Talbert Marshlands, spreading over nearly 5.8 NM.

Carr called the oil spill an environmental disaster and a “potential ecological catastrophic.” She said that Huntington Beach-side city, nearly 65 kilometers south of Los Angeles, had thirty-four square km of ocean and portions of its coastline covered with oil. In addition, Surf City USA is one of the rare spots in South California where oil platforms are clearly seen from the beach.

California Oil Leak Cause Being Investigated

Moreover, the U.S. Coast Guard said that authorities deployed 1634 meters of protective booms, which help contain and slow the oil flows, and around 3150 gallons had been recovered from the water as of Sunday.

Around six hours after the initial report was received, the National Oceanic and Atmospheric Administration (NOAA) reported that satellite images spotted an oil spread over five kilometers long. The National Response Center’s report stated the image of an oil leak was possibly linked with the initial report. The firm that operates the pipeline initially reported the oil spill to the USCG’s response center at 08:55 AM on Saturday. The report, however, stated the event occurred at 02:30 AM.

NTSB is sending two investigators to gather information and assess the source of the Oct. 2, 2021, oil leak near Long Beach, California.

The USCG officials said Monday that probers are looking into if a ship’s anchor might have struck the oil pipeline on the floor of the ocean.

Jeff Boyles, Newport Beach Fire Chief, stated the Department received many reports of a foul order on 30th Sept. and 1st Oct., but such statements are frequent, and the city received no formal report of an oil leak until Saturday noon.

Furthermore, Katrina Foley, Orange County Supervisor, said that the timing of when the reports were received would also be probed. She told the news briefing that Mariners were reporting they observed a sheen late Friday.