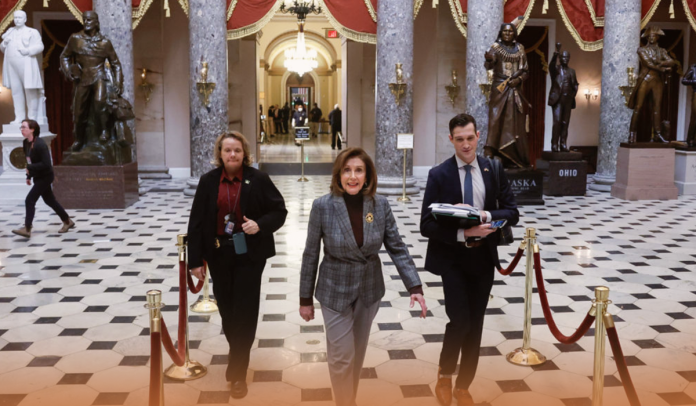 On Friday, the US House of Representatives voted 225/201 to approve a nearly USD 1.7T government spending measure to prevent a temporary shutdown, which was scheduled to take effect in the US Capital at 05:00 GMT on December 24. The US funding measure survived a GOP-led motion to adjourn, voting 225-201 along party lines.

In addition, one of the last significant actions of Democratic-controlled Congress, the bill to fund the federal departments and agencies for the remaining Fiscal Year, now moves to President Joe Biden’s desk. Mr. Biden earlier said that he was eager to sign the spending measure into law. Previously on December 22, the United States Senate approved the bumper bill in a cross-party vote of 68/29.

Furthermore, according to media reports, the legislation’s passage through both chambers of the United States Congress helps avoid the temporary shutdown that would’ve furloughed US government employees and halted non-essential services. The bill would provide money to the American administration all through the coming Fiscal Year to September 30.

2) While our majority leadership passed a 1.7 trillion dollar spending bill for their wish list NONE OF IT addressed the fake pills or illicit fentanyl pouring into this country mass killing our children. To say that they have forgotten what’s most important is an understatement

The 4,155-page massive budget includes measures to support war-torn Ukraine, strengthen American defense, and money for American domestic programs. The spending bill contains USD 858 bn for defense and around USD 773 bn for domestic priorities. Forty-five billion dollars are allocated for emergency assistance to brave Ukrainians, and another thirty-eight billion dollars for environmental protection. In addition, the U.S. Environmental Protection Agency (EPA) gets a raise of 576 million dollars over its budget in 2021.

It’s reported that the numbers show nearly a five percent hike in non-defense funding and an eight percent increase for the Defense Department and national defense & security. In addition, the spending bill includes a thirty percent hike (to USD 8 billion) for childcare and the CDBG Program to assist low-income families in paying for childcare.

The US lawmakers also envisioned increasing the Federal Pell Grants for low-income undergraduates by 500 to 7395 dollars. Moreover, the U.S. Capitol Police service will witness an increase of USD 132 million in their current budget. The legislation contains a 4.6 percent rise in pay for American military personnel.