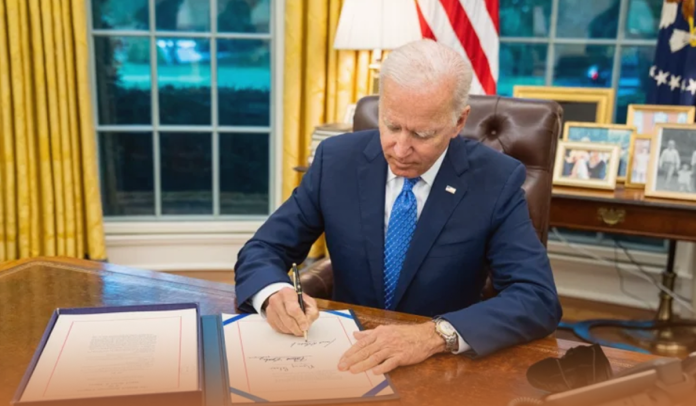 On Friday, Joe Biden, the President of America, signed the stopgap funding bill to keep the government open until December 16. On Friday, the continuing resolution bill was passed by the House, 232/193 vote, with less than a dozen GOPs joining all Democrats to avert the partial shutdown. Previously on Thursday, the U.S. Senate passed the measure on a bipartisan basis in a 72/25 vote to fund the federal administration operations through mid-December.

The American policymakers had expressed confidence there’d not be a stop in federal government operations, but it’s typical of the United States Congress in the past years to experience deadlines. In part, that’s for the reason that the opposition finds it calm to reach the crucial deals just before a deadline to prevent a partial shutdown under tight timeframes.

According to media reports, the incumbent party members said that approving the measure was essential to helping war-torn Ukraine and affectees of the natural hazards in America, including the most powerful and devastating Hurricane Ian, as it provides a FEMA disaster fund with 12-months’ worth of funds up front instead of 2.5 months.

Along with the funding to keep the government operations running, the temporary funding legislation offers around 12.3 bn dollars for Ukrainians as it continues to vigorously fight off Moscow’s brutality and wants the U.S. Defense Department to report on the consumption of US dollars in Ukraine. The economic and defense assistance to Kyiv is a bipartisan concern.

Furthermore, the newly signed CR reauthorized the FDA User Fee program for the next five years. The User Fee Programs help the federal health agency to fulfill its job of protecting public well-being and boosting re-engineering R&D and innovation processes in the industry.

President Joe Biden signed into law a bill that provides Ukraine with $12.3 billion in economic and military aid, the New York Times reported.

According to journalists, the approximately 12 bn dollars funding measure in further assistance for the people and forces of the war-ravaged country provides funds for Washington to continue sending weapons to refill American stockpiles that have been delivered to Kyiv during the continuing brutal conflict.

And to keep assisting Zelenskyy forces in their stunning counteroffensive against Russians, the CR assigns another three billion dollars for the U.S. Defense Department’s Ukraine Security Assistance Initiative (USAI). That money would let Washington to acquire and buy arms and equipment from the defense industry and then dispatch them to the Ukrainian Armed Forces. Moreover, the continuing resolution approves another 3.7 bn dollars in Presidential Drawdown Authority (PDA) funding for Security Aid for Ukraine, which authorizes America to deliver arms directly from Defense Department stocks.

According to a fact sheet from Democratic Senators about the bill, the pot of an additional 1.5 bn dollars is also contained within the resolution to refill American stocks of weapons delivered to the Kyiv administration.