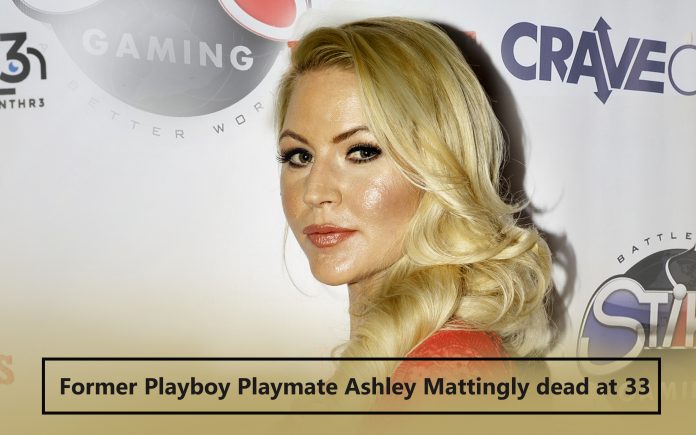 Ashley Mattingly, the former Playboy Playmate, has died at the age of thirty-three years, confirmed by Fox News.

The spokesperson of Travis County Medical Examiner’s office on Monday said that any autopsy or toxicology that led to the official reason for Mattingly’s death which was taken from thirty to ninety days.

Mattingly’s siblings reaction on her death

On Sunday, Billy, who is Mattingly’s twin brother, also declared the sad news of his sister’s death on Facebook and also remembered his sister as a Beauty Queen and popular rockstar.

Christy Deweese, Mattingly’s sister, also made a Facebook post and said that because I am not able to find any words to say so I will just be leaving this here. She added that she loves her and will miss her every day. She also wrote on Facebook and said fly high sister, and I believe that you are the most gorgeous angel in the heaven.

Former Playboy Playmate Ashley Mattingly is dead at age 33 from an apparent suicide, reports say. She was Miss March in 2011.https://t.co/C6M6nAV5XU

TMZ (Thirsty Mile Zone) claims that Mattingly didn’t response after her friend’s called, on Friday, to Police Department to check the wellness of Mattingly following her radio silence.

Thus far, no official reason for her death has been reported. Moreover, Christy and Billy said to the outlet that their sister’s life was taken by herself on Wednesday.

In March 2011, Mattingly was the miss of the Playboy, and for the last two years, she was living in Austin, Texas, and she was an alcohol abuser apparently struggling to quit and even got better to get rid of the alcohol addiction, reported by her family to TMZ.

Mattingly’s family reported, due to the coronavirus crisis strict orders are implementing to stay at home in each state, these orders didn’t prove helpful for Mattingly, who previously accepted nine months old puppy to decrease her loneliness.