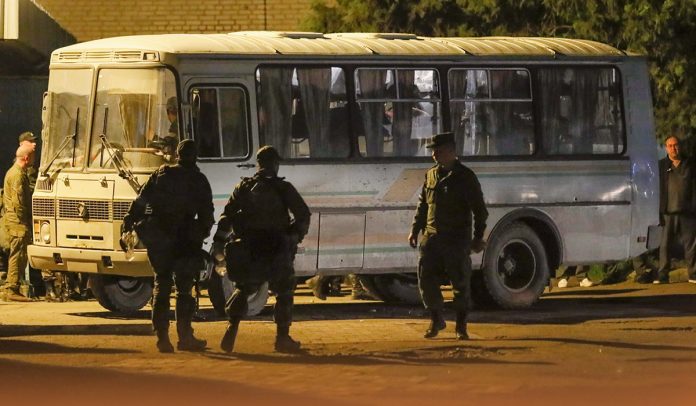 After a lengthy deadlock, Hanna Malyar, Ukrainian Deputy Defense Minister, said Monday that around two hundred and sixty-four Ukrainian troops had been taken away from Mariupol’s besieged Azovstal steel plant. According to the media reports, five buses were seen taking forces from the country’s largest steel rolling plant and arriving in the town of Novoazovs’k in Donetsk Oblast.

According to the reporters, some of the freed soldiers were injured and taken away on stretchers. However, nearly six hundred military personnel were still anticipated to have been inside the Azovstal.

Together with Ukraine’s Ministry of Defense, the National Guard, the Armed Forces of Ukraine, and the State Border Guard Service launched an operation to evacuate the defenders of the port city of Mariupol blocked on the territory of the Mariupol’s steel plant.

In a Facebook post on 16th May, fifty-three seriously wounded people were rescued from Metallurgical Combine Azovstal to a medical facility in Novoazovs’k, a border town on the south-eastern tip of Ukraine, for medical care. An additional two hundred and eleven people were taken to a rebel-held town of Olenivka through the green corridor. An exchange procedure will be executed to return them home.

Both cities are occupied by Russian forces.

Malyar said that Ukrainian authorities were working to save the rest of Ukrainian soldiers at Azovstal.

Earlier reports said that some 1,000 Ukrainian soldiers were staying at the besieged Azovstal.

Moreover, as for the Ukrainian defenders who are still on the territory of the metallurgical plant, rescue operations are being launched by the joint efforts of the above-mentioned agencies.

Speaking on a Telegram channel, the President of Ukraine, said that Monday, May 16, was a difficult day. But, like all others, this day is also aimed at saving their country and their courageous people. He expressed thanks to the robust engagement of the Ukrainian military, intelligence, as well as the negotiating team, Geneva-based humanitarian organization, the ICRC, and the United Nations. He added Kyiv hopes that they’ll be able to save the lives of Ukrainian defenders.

In an address of the Ukrainian President on the outcomes of the 82nd day of the Russia-Ukraine war, he said he wanted to emphasize that “Ukraine needs its heroes alive.” He also noted that this’s their principle. According to journalists from Minsk, Belarus, Ukraine’s Zelenskyy is a leader who values human life.

However, the Ukrainian leader said that the forces of Ukraine might not be evacuated immediately and cautioned that discussions over their safe evacuation would require time and fineness. Hundreds of Ukrainian defenders, as well as several civilian residents, have been defending themselves on the spot since the advancing Putin-led military surrounded the southern Ukrainian city in March 2022.

Furthermore, Russian state-controlled news outlets posted a video of what they say were wounded Ukrainian military personnel being taken away from Azovstal iron and steelworks. And Ms. Malyar said the soldiers would be exchanged for Russian war prisoners.